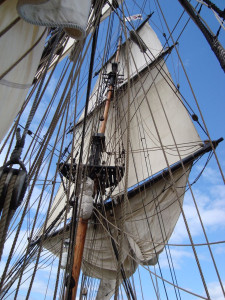 I am extremely pleased to report that my "Regency Interplanetary Airship Adventure" novel Arabella of Mars has sold to prominent SF publisher Tor in a three-book deal. The first volume will be published in late 2015 or early 2016, with two sequels to follow at yearly intervals.

Arabella Ashby is a Patrick O'Brian girl in a Jane Austen world -- born and raised on Mars, she was hauled back home by her mother, where she's stifled by England's gravity, climate, and attitudes toward women. When she learns that her evil cousin plans to kill her brother and inherit the family fortune, she joins the crew of an interplanetary clipper ship in order to beat him to Mars. But privateers, mutiny, and insurrection stand in her way. Will she arrive in time?

Arabella of Mars will appeal to fans of Naomi Novik's Temeraire books, Scott Westerfeld's Leviathan trilogy, and Mary Robinette Kowal's Glamourist Histories, all of which are fast-paced adventures combining a historical setting with a fantasy/SF twist. A novelette in the same universe, "The Wreck of the Mars Adventure," appeared in Locus Award winning anthology Old Mars, edited by George R. R. Martin and Gardner Dozois; another related novelette, "The End of the Silk Road," appeared in F&SF.

As for the author, I have published over fifty short stories in major markets. My stories have won the Hugo, have been nominated for the Nebula, and have appeared in five Year's Best anthologies, among many other honors, and my collection Space Magic won the Endeavour Award for the year's best F/SF book by a Pacific Northwest writer. I also wrote one of three new stories in the revised edition of George R.R. Martin's Wild Cards 1. In 2010 I spent two weeks at a simulated Mars base in Utah, and have presented a highly-regarded slide show about the trip at many science fiction conventions and other venues. A video I made of my short story "Dr. Talon's Letter to the Editor" was a finalist for the 2013 Parsec Award.

Getting to this point has been a real emotional rollercoaster, with many years of hard work, long waits, and near misses. Arabella of Mars, my first sale, is my fourth completed novel; I started outlining the first one at the beginning of 2003, so this moment is the culmination of more than ten years of effort. And yet, of course, this is also only the beginning of an equally long strange journey to publication and beyond. I have a lot to do in the next year, including soliciting blurbs, writing blog posts, assembling a street team, and scheduling readings and interviews, as well as shepherding the book through production, not to mention writing book 2 (which currently exists as a solid outline and 4000 words of text). It's going to be a heck of a ride, and I plan to keep you informed along the way.

If you have any questions, please feel free to email them or leave them as comments here. I can use topics for forthcoming blog posts! :-)
Collapse